We received the question quite a few times: 'When will you break up the Modor NF-1 in Eurorack pieces?' Well, we 're not going to build Eurorack modules for everything there is in the NF-1, there are plenty of good Eurorack oscillators, LFO's, ENV's, etc out there. But we thought some of the NF-1's building stones are that special and unique we can't leave the modular world deprived of it ... :-)

So, here we are: Modor's Eurorack Modules. We built a Noisy Oscillator module, and Comb Filter and Formant Filter modules!

* Our Eurorack modules are out of production *

Our Noisy Oscillator module is an oscillator that mixes two signals: a 'regular' wave (sawtooth/square/triangle) and a 'tonal noisy' wave. This adds a special noisy layer over the sound, that adds 'air', grit or dirt, depending on the combinations you make. The MOD parameter acts on the noisy waveforms:

The noisy wave can be set equal, or 1 or 2 octaves above the regular wave.

The module has two voices, with their own set of CV and output connectors. This can be used to play in a full 2-voice polyphony, or in a 2-voice unison. The outputs can be separate, using both output connectors, or mixed, using only the connector of the second voice.

Next to the 1V/oct pitch CV, the module offers CV control over pitch (FM), the MOD parameter and the sound level:

The CV signals of the second voice (upper row of connectors) are always normalled to the signal of the first voice (lower row), so you can use a single LFO for some FM vibrato or tremolo on both voices, for example. Only the V/oct connector of the second voice is normalled to the first voice with an extra addition of a fixed voltage that can be set using a trimmer at the backside of the module. This way you can use the 2 voices to play in unison with a fixed pitch separation you can set on the backside. 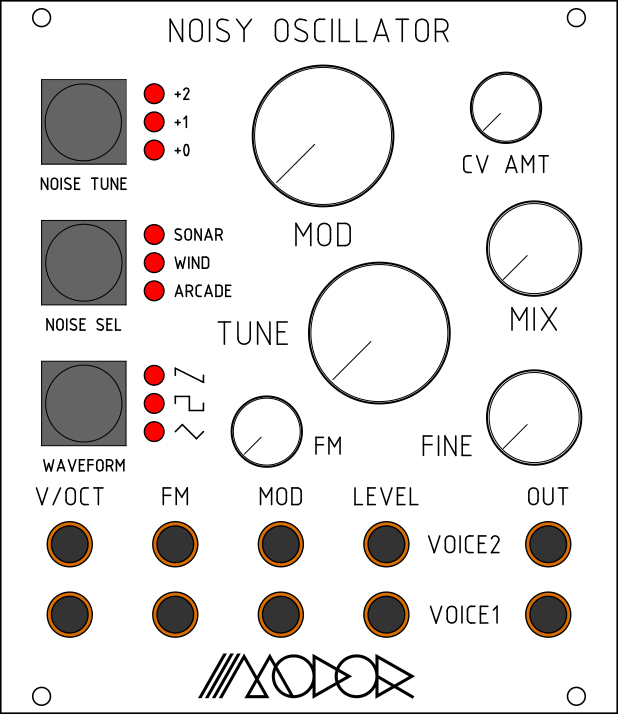 What is a Comb Filter? It is a digital filter where the input signal is mixed with a slightly delayed version of the input signal. You won't hear it as some kind of an echo, as this delay is very short (40ms at max). But the mixing process creates a number of equally spaced peaks and holes in the frequency spectrum, that make it look like the teeth of a comb. That's where the name 'Comb Filter' comes from.

Comb filters are typically used to make chorus and flanger style effects. These effects are created by modulating the delay time. With longer and relatively fast modulated delays you receive a chorus effect. With short to very short slowly modulated delays, combined with some feedback you'll get the typical sound of a flanger unit.

So, the most interesting parameter in this is the delay time. That determines the frequency spacing of the comb teeth. So that's why there's a CV control for it. The typical chorus and flanger effects are made by modulating the delay time with a triangle LFO. So there's a triangle LFO onboard the module, with speed control. If you don't enter any CV in the CV1 connector, it is normalled to this internal LFO to make typical effects. CV2 is normalled to the reverse signal of CV1, to make Modor's typical wide stereo effects, just as on the NF-1 synthesizer. But of course, you can enter your own CV signals in there: LFO's, Envelopes or some rhythmically undulating spacey voltage signals... Check it out!

Modor's Formant Filter is a special filter that does a kind of 'vowel morphing' between three vowels. The big central FORMANT control is responsible for that, and on the Eurorack module there's of course a CV control (with attenuation) on this parameter.

It gets more interesting when you're able to 'morph' between different sets of those formant frequencies. Behind the central FORMANT control, there are 3 of those sets of frequencies. One at full left, one in the middle, and one fully right. So you can for example morph between A-E-O. Or U-I-E. Or AO-UI-EU. Or ...

That's what it does: morphing between different sets of formant frequencies, and that's why it sounds a lot more genuine vowelish than many other static band-pass combinators.

There are 10 preset vowels, that can be selected with the VOWEL button: A-E-O-I-OE-U-EI-EU-AO-U-UI. The vowels of the Dutch language... :-)

The 1-2-3-4 controls on top give you the possibility of composing your own vowels by manually adjusting the frequency bands.

The center big FORMANT control does the morphing between the three vowels, the AMOUNT control sets the amount of CV modulation for this control.

The three leds above the buttons show which of the three vowels is selected for editing. That depends on the position of the FORMANT control.

The VOWEL button chooses which of the 10 factory presets go into the active vowel. SHIFT+VOWEL saves all the actual settings to be reloaded when the modular system is powered off and on.