The hoover is a very recognisable synth lead sound that shaped at least a part of the sound of the 90's. It's sometimes also called a 'Mentasm' or the 'Dominator sound' after the records Mentasm (Joey Beltram, 1991) and Dominator (Human Resource, 1991). The sound was extensively used in numerous records in the 90's house, hardcore, rave and jungle scenes. The Prodigy's Charly (1992) is probably one of the most famous hoovers of the 90's.

Well, not entirely sure what took it 5 years, because the Hoover sound existed since 1986, the year Roland's α-Juno came out. That was the first and original hoover synth, thanks to it's PWM sawtooth oscillator, that no other synth had. All other subtractive synths of the time only had PWM on their Pulse waveforms, even Roland's. A PWM on the sawtooth was something entirely new, and still today only very few synths have this sawtooth PWM. 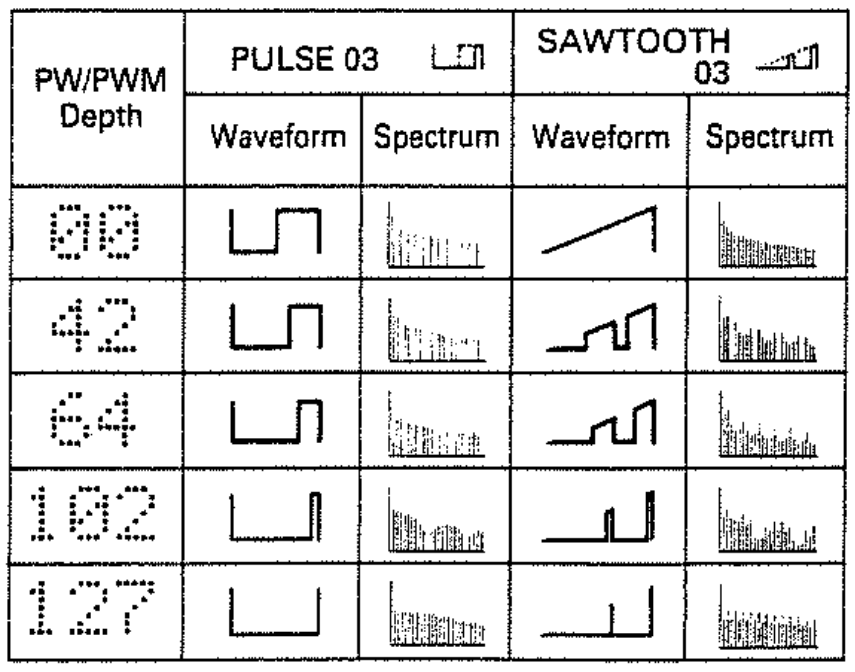 The hoover sound was made by a Pulse PWM and a Sawtooth PWM on top of each other. Below that was a Square Sub Oscillator, 2 octaves below the other two. The whole thing than undergoes some heavy chorusing, et voilà... ! Very often (but not always) there's also some pitch enveloping that gives an even more aggressive touch to the sound.

A very important part of the trick is the 'alignment' of the Saw PWM and Pulse PWM. On the α-Juno both waveforms are produced by a single oscillator with multiple waveform outputs. That means that both waveforms automatically stay exactly aligned as in the sketch below, this is a very important characteristic of the real Hoover sound. 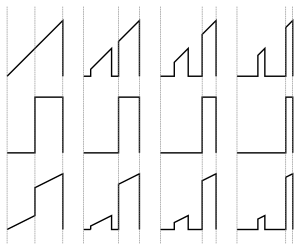 On the NF-1(m) this exact alignment can be obtained by having 2 oscillators selected simultaneously when adjusting the PWM settings.

So, here we go: how do you make a Hoover Sound on the Modor NF-1?

We use three oscillators:

The PWM (MOD) of the third oscillator doesn't have to be modulated, you can experiment a little to get a good sounding MOD value. Then, select both OSC1 and OSC2 (push two buttons simultaneously), and set PW (MOD), PWM (MOD LFO) and play a little with the MOD LFO depth and LFO1 speed. LFO1 should have a triangle waveform.

There's your basic hoover! But, we still need a heavy chorus. Turn the Chorus/Flanger mix halfway, and experiment with the DELAY, SPEED and DEPTH settings of the Chorus. FEEDBACK should stay neutral (in the middle).

And finally of course... Give it some pitch envelope. Unselect all oscillators (no leds in the OSC-switches) and turn MOD ENV to get pitch enveloping. Play with the parameters of ENV1 to get a good pitch envelope/